After having reduced their involvement in the day-to-day activities of the DAO the authors have discussed on how to collect a wider array of opinions on where such a large DAO should focus its attention. Since the early days of the journey we have seen a few centralized points of focus proposing directions which we have voted on. This has helped the DAO grow into where we are today, a large sprawling entity with a wide focus area.

During this time a lot of great proposals have come and gone, some just because it’s hard to push them through and some because it’s hard to make the tough calls in an environment where popularity = roles and remuneration. One such area could be standardization of what a project that gets funded by the DAO owes the DAO, it’s a hard topic, who wants to be the one demanding for projects to agree (especially after the fact of funding) to pay the DAO back? Or the ones to stop the next round of funding because KPI’s were not reached?

BanklessDAO have seen a lot of great projects, a lot of great people and with this a large influx of people in general. However the governance and the loud voices remain with a few core contributors. We would like to organize a DAO-wide sentiment check where all BANK holders can raise their voices and vote on what’s most important to them.

Therefore we suggest a new method of collecting wide sentiment and priorities within BanklessDAO using the new governance tool jokedao.

We strongly feel BanklessDAO should experiment with new ways of measuring the sentiment of its wider contributor base and not just engage in closed-circle discussions where the large populations mainly get to speak by voting yes / no on proposals. For any DAO to survive in the longer term it’s alignment of contributors and focus on its mission. BanklessDAO has during its first year engaged in a lot of projects and areas, we think it’s time to do a contributor check and see what areas the DAO should prioritize.

We feel the values of jokedao strongly align with the ones of BanklessDAO and that the tool is an interesting way of gauging sentiment from a large population.

jokedao is building community-led governance experiments for DAOs to build soft consensus. They launched last month and are already being used by Tally, Aave, Packy Mccormick (Not Boring), Austin Griffith (BuidlGuidl), Juicebox, and many more. 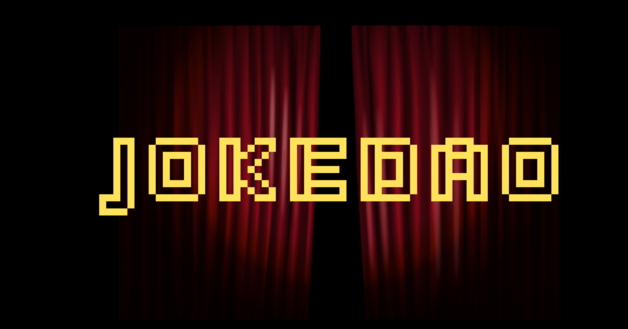 jokedao enables bottom-up, on-chain governance, letting token-holders submit proposals and vote on their favorites—enabling community-set governance for user-generated roadmaps, grants, endorsements, bounties, curation, and contests. It flips the way governance has been done: now it’s the community itself that can respond to prompts by submitting ideas and voting on them. For the first time, the community is incentivized to raise their voice, and governance becomes truly decentralized—as well as gamified and fun.

jokedao contests are held in two periods. During the submissions period, communities can respond to prompts with proposals. 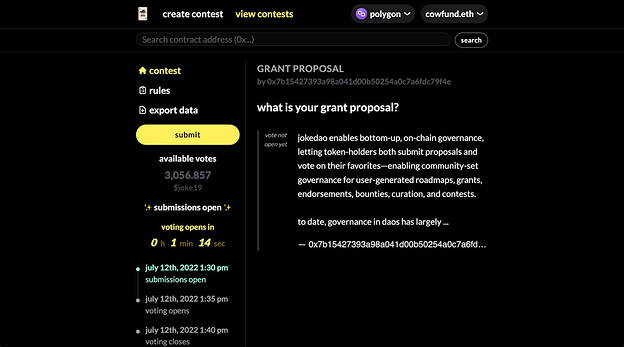 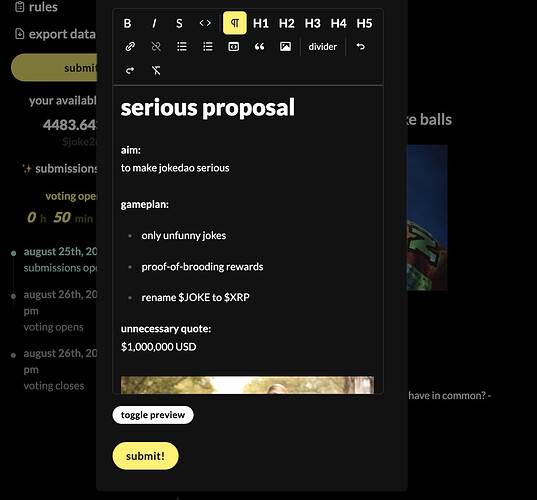 During the voting period, communities can vote on their favorite proposals to gauge the relative prioritization of each. 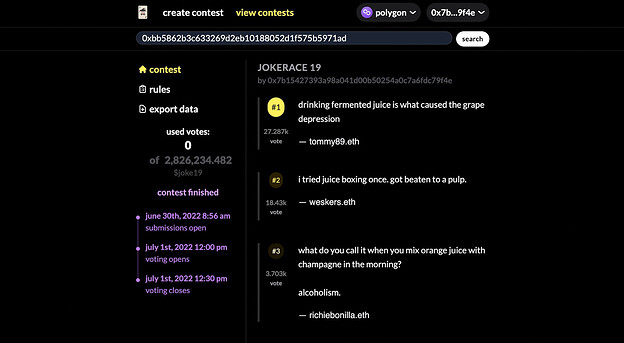 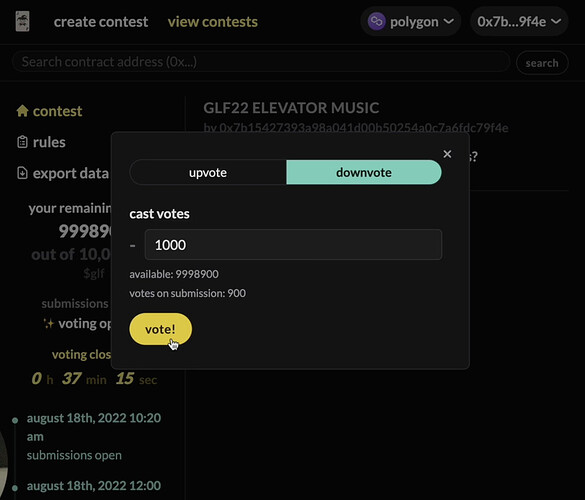 Decentralized governance is particularly useful for incentivizing use cases for builders and creators, including:

In an effort to gauge sentiment around the DAO in an open and seamless way, we propose using the jokedao platform where everyone can submit their prioritized areas and then vote on their own or others suggestions (voting can be split among several proposals). Using this first contest the DAO and the DAO Governance can continue drilling down within the areas of its members using the jokedao tool. If this is considered valuable, we suggest doing a seasonal temp check of the DAO sentiment.

Vote 2 options (drilling down on Revenue generation), “How can we change our funding requirement to incentivize projects generating revenue for the DAO?”

The result will help all involved in governance of the DAO with a sentiment check where the contributor base feels their focus should be, it will (hopefully) be apparent where we’re currently lacking clarity and/or focus. We feel that the DAO has chosen centralization of sentiment gauging to core contributors who make proposals based on their view of sentiment and DAO priorities within governance. This would enable the masses to set the priorities for the working groups, without interference or scoping in terms of options.

For the voting weight we suggest a simple allocation of 100 tokens per BANK holder, making no difference between someone holding 1mBANK or 100 BANK. We’re looking for wide sentiment and not to pass a snapshot proposal. Whenever we as a DAO can make everyone’s voices heard we most definitely should aim to take the chance. (To avoid gaming this a snapshot of holder on L1 and Polygon has been taken)

To lower the cost for the DAO and to support new governance solutions on Polygon the Polygon DAO team has agreed to cover the cost of creating and distributing the voting tokens to all BANK holders. Anyone participating in the process will only cover the gas fees of Polygon and there will be no financial impact for BanklessDAO (unless the DAO would like to cover the gas of its members).

As stated earlier we aim to gauge the sentiment of priorities within the DAO while testing a new sentiment / governance tool. The deliverables will be the data collected and the team will be available to continue working for drill-down votes if the DAO wants to. We can’t promise cost coverage from PolygonDAO but we will show what the covered costs of the first round were to inform the DAO for future votes.

We will package the data in a nice way and add some light analysis of the results.

BanklessDAO will be working with jokedao and PolygonDAO, both parties would expect some small visibility in the DAO channels promoting the DAO Governance on Polygon. In return, as stated, the DAO gets the costs for the trial covered.

Since the purpose of this is to gauge wide sentiment we aim to have a high number of wallets participating in the voting on jokedao. BANK has around 5500 holders on L1 ETH, of 303 voted on the S5 funding at Snapshot. Our aim would be to attract at the very least 303 voting wallets.

TommyOlofsson, long time contributor to BanklessDAO, joined just after genesis and has contributed to a variation of guilds. Currently holds no roles within BanklessDAO but does work as a Polygon DAO Ops and Treasury lead.

Grendel, long time contributor to BanklessDAO has been active since genesis contributing within several guilds and projects. Remains on the main multi-sig. He is also Polygon DAO Lead, Serial IT entrepreneur.

Eagle has been a long standing leader of the Law Guild and contributor to Bankless DAO. He is also a Law Professor and Attorney with a European juridical background. He teaches topics related to blockchain and emerging digital technologies. He is trying to ameliorate his technical knowledge of DAOs and smart contract solutions.

Should BanklessDAO partner with jokedao and Polygon DAO to conduct this sentiment check?

I can see this being very beneficial for the DAO and a great relationships, great work team!

This is an incredible example of DAO collaboration and biz dev. Big props to the authors. This is a no-brainer YES! Thank you for putting this together!!

This is a great initiative to get more engagement and input from the community to define our Bankless DAO goals, including the approach.

JokeDAO would be a great tool to do it, it is super user-friendly and we can use the on-chain data for some later analyses.

This is very interesting. It’s worth trying it.

Quality proposal from a solid group of OG contributors. Nice work in helping us slay Moloch.

Know , support these folks and have been wondering as well as wandering in bDAO along these same lines. Great to see these OGs still here giving it a push for validity. TY all.

It does seem to be a fresh approach to a long-standing issue not only in BDAO but also in the DAO ecosystem in general.

Rock solid proposal and an example meaningful partnership being developed between three DAOs. I’m a believer in bottom-up governance and keen to find out whether gamification can make the best ideas win in our community.

As quorum requirements are only set for initiatives/projects which ask for funds from bDAOs’ treasury (which is not given) and as there is major support by some of bDAO members already I think you’re good to go and can realise your plans!

So in order to actually have a discussion about the jokedao proposals we actually have to come back to the forums. Seems like a waste when we could just adopt discord forums and teach folks how to actually write and discuss proposals and brainstorms in the place where we work which is discord.

First of all, “tools we already use” is the forum. This has been the place to post drafts, vote and finalize proposal since Season 0, so like it or not its a tool we are using, have been using and probably will continue to use.

If you want to change and move the proposal process I suggest you do that in its own proposal, I don’t see bringing it up here will change anything. You’re of course free to discuss the jokedao proposal in whatever forum you’d like, no one will stop you.

I like the concept of using JokeDAO to replace the Grants Committee. I believe that the bDAO community would be better able to prioritize which projects would benefit the DAO and it would actively encourage more engagement throughout the DAO. Holding each other responsible on a social level is a great incentive to pitch a project that benefits the bDAO community.