Thanks to @frogmonkee we have aggregate Discord data that may be of interest to the community.

Since launch, Bankless DAO has grown significantly, perhaps no where more evident than the sheer number of Discord channels that has multiplied. In traditional organizations, much resources are spent to figure out engagement.

For DAOs, like Bankless, that live and breathe in the Discord, this provides one (among many) source(s) of data for see where the energy and engagement is happening.

NOTE: The following is exploratory, designed to explore the meaning and interpretation of various metrics. To raise questions rather than provide any definitive answers. 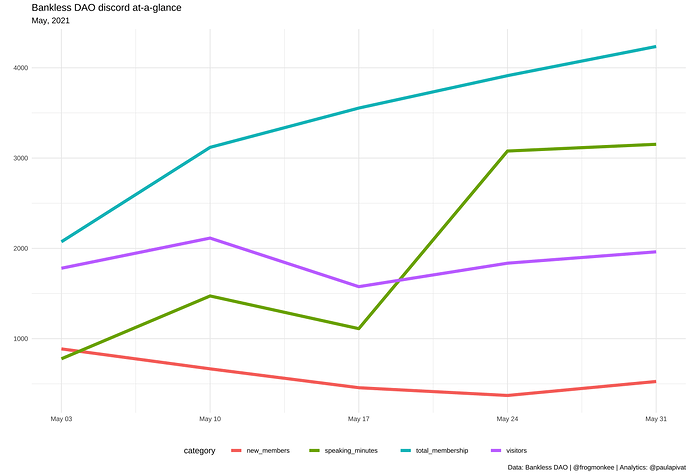 Through out the month:

Next we have a list of Discord Channels ordered by number of messages, readers and chatters.

Here are the Top 30 Discord Channels by Number of Messages: 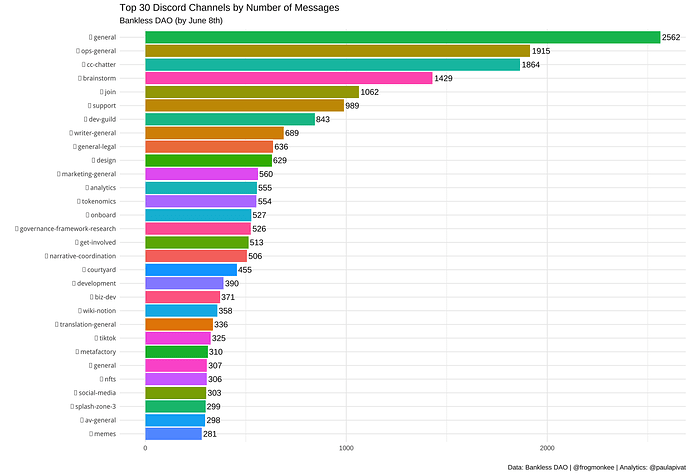 It’s not surprising that channels like general, ops-general, cc-chatter would be the top 3 in terms of volume of messages. For guild-specific channels, it looks like dev-guild has the most messages, followed by writer-general.

Here are the Top 30 Discord Channels by Number of Readers: 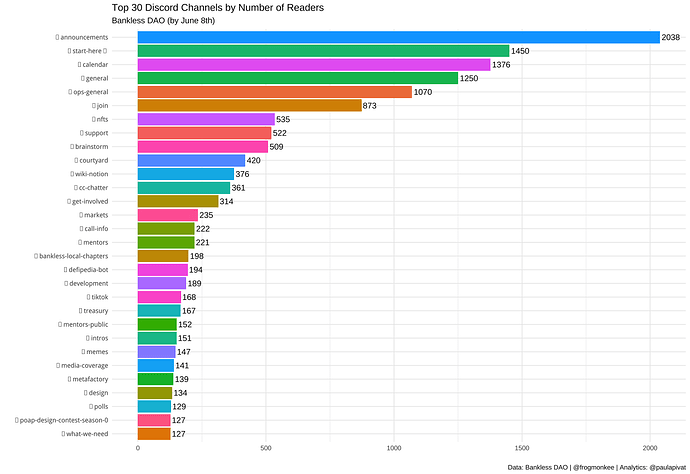 In addition to number of messages, we can track messages read. No surprise in the top 3-4 channels for this metric (i.e., announcements, start-here, calendar, general).

What’s interesting is that guild-specific channels are not making the top-30 in terms of messages “read”. This would suggest that messages generated within guild channels is not as widely read by the general members.

This implies a different reading audience between guild-channels and general-channels. Finally, we have

Top 30 Discord Channels by the Number of Chatters 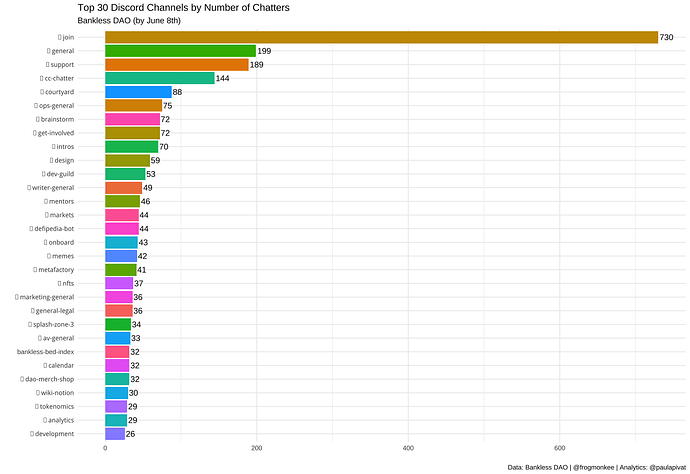 I think these are the Number of people who enter a channel and leave at least one message. It makes sense the join channel would score highest people are required to signal !join in this channel before receiving further instructions from Collab.Land bot.

@Grendel raised an interesting question: “What are the Number of Discord members who post at least X times a week” which would have implications for:

And many great ideas here.

The current dataset contains aggregate data, which limits our ability to answer the above fascinating questions, but there could be additional data to be had.

Let me know what other questions you’d like to ask

Thank you, the data presented are truly illuminating.
I suppose the number of “new users” will increase once the new website and integrated project are online.

The “Readers” number is also very interesting. It could mean that a large portion of the members prefer to browse the main and “lighter” channels and / or that some members may be stopped by the great (and absolutely fantastic) level of involvement of others.
Not sure how we could inspect these issues, perhaps with some opinion polls?