I’m wondering if the part about " including Ethereum, DeFi, and Bitcoin." is really needed. Its a bit limiting and being stated twice is hammering it hard. Should we consider something like trustless, decentralized money systems (could go w/ blockchain but thats potentially limiting as well).

I agree. I only left it in because it was in RSA’s goal statement in the email from a few days ago and I felt a little weird getting away from his text. I do agree that it should be changed though. I like your suggestion because it is broad enough to encompass whatever future DeFi tools materialize.

I saw that to when tying out your work to the medium articles…you did a great job at starting at bankless LLC medium info and organizing it this way. To what degree should we feel bound to it?

I think we’re solidly at the core of what defines the Bankless movement with what we have so far in this vision and mission. Since it’s an open working doc we can get input from the founders themselves if we’re missing the mark. Trying to thread together bits of text from Bankless emails in this is probably not the best way to write this.

I agree with broadening definition, technically this could even move past finance. Blockchain could enter politics with public ledgers for voting

Maybe in the future Bankless media covers block chains in the public sector and in health care.
I think the Revolution extends past finance

I think we can propose amendments for the future. Just like the American constitution. A living breathing document…

I think there is real value in attempting to encode the social side of the decision making process and the structure of the DAO in this constitution Not in a prescriptive way, but descriptive of what is emerging. Where is power held, how is it used, how are proposals created, etc. It is likely too early to thoroughly describe this right now, but we could describe the proposal development process which 0xlucas has written here: Discord

I believe we could keep it general and write something like this:
The Bankless DAO uses a collaborative consensus-seeking process to create and refine high level ideas into proposals which are presented by Bankless DAO moderators (Is this correct?) for formal vote by BANK token holders. Bankless DAO members (??) measure consensus around high level ideas suitable for formal vote proposal through several mechanisms: 1. gathering groups to develop high level ideas into proposals. 2. seeking consensus signals from Bankless DAO members on official DAO communication platforms. 3. seeking support from members with high position within the Bankless DAO hierarcy (I’m writing this because it’s not clear how positional power within the DAO is to be used. Do we need to listen for founders’ support? Level 3 or 4 support (and how would this even be measured) What about BANK Whale support? Moderator or other position holder support?

It is likely that our overall culture around decision making will evolve. At this time there are multiple levels of membership status and members of higher level have access to more communication channels than those of lower status. This is likely to affect the proposal development process. If a lower-level member is unable to access channels used by those with more power within the DAO, she will be unable to measure the support of the very members with the power to support or kill her idea. This is likely to stifle proposal development at the lower membership levels and it is likely that this is intentional, with more power reserved for trusted members closest to the founders, those who have been subscribed to the Bankless podcast the longest, or those who have been able to accumulate more BANK tokens.

It’s interesting to see the discussions playing out on new token distribution at this time in light of these questions. In many ways Bankless DAO governance (the social layer, not the computational layer) will emerge from these early decisions.

I agree - this is going to move into so many different sectors. We could focus on finance until this DAO is up and running, then delve into other areas - PS: constitution is looking great

Ya the governance section needs to be fleshed out more. I haven’t been keeping up with the DAO structure propositions. I’ll have to do some more reading in those channels. You seem to be more up to speed. If you have stuff to add scribble it in and we’ll discuss later. Although we might have to wait till some proposals get approved.
Ya it’s definitely emergent. Kind of cool to watch the ideas get bounced around

This is fantastic! A couple of thoughts

Ya I think that is a good way of phrasing it. And emphasis on “credible.” Coins like Shiba Inu or safe moon come to mind. Projects that exist only to pump.

I don’t actually think that should be controversial. We are trying to create something as a community that accrues value both to the DAO and the world at large. The market has a way of rewarding value with capital. Obviously we’re not trying to make the next pump token. But if the price appreciates hopefully it’s reflective of real world impact

DAO member Terry Sector posted this in Discord so I thought it is appropriate for this topic. This is something we can take as a model. But maybe is not a constitution but a code for the DAO.
https://lib.openlaw.io/web/default/template/bbllc-dao%20-%20vermont

Now I believe no one should have more vote weighted power that others just because they have more BANK. One person, one vote equally weighted. If people with more BANK has more voting power this opens the doors to corruption and there is the risk of any entity outside the DAO to eventually take over the DAO.
In addition to this, the DAO is for everyone that share the same mission, the mission is set up by the DAO, and the DAO is the sum of all its members. Members have equal voting power.

Agree the boundries between the soft and hard consensus layers need to be fleshed out, - but not too much. Who or what metrics have power to call for hard consensus vote, for example. I like the details in the openlaw link, but it’s perhaps too much at this stage. Even though there’s value in the token, we are still in an organic founding phase so we don’t want to be too rigid. Perhaps we set some kind of timeframe, say 6 months, to move from high level constitution and operating outline into more of a legal doc like openlaw has done.

I like where this is going, but I think the Constitution needs both an aspirational layer and operational layer, and the best place to have these conversations is in this thread. Specifically from an operational aspect, there are still a lot of uncertainty (or at least I’m not certain of it) in terms of how ideas go from:

-Idea
-Proposal (posted here in the forum using the specification template)
-Snapshot for BANK holders to vote on.

Operational Topics That Could Be Included in the Constitution

There is a framework that @frogmonkee developed that I think is very helpful (below). 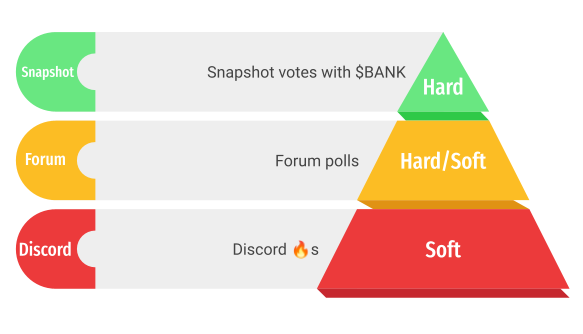 So, in the Constitution, I think at the very least there needs to an agreement on what high-level governance looks like. This means:

-How ideas move into the proposal stage and what is the quorum for whether a proposal is deemed valid enough to move to the snapshot phase - proposals are critical because they do not require $BANK ownership to move ahead, and how long proposals should be open for voting (see below)
-How DAO members are notified about proposals (weekly emails)
-Standard length of time for proposals to be considered
-Snapshot voting: Who is authorized to post snapshot votes and how long votes are open for voting
-Post-vote evaluation and project management: If necessary, how will funded/approved projects/initiatives receive community oversight; what happens if funded projects don’t deliver, etc.

What About Large $BANK Holders’ Influence?

In terms of concerns about $BANK holders having disproportionate sway over the governance process, the beauty of the soft/hard framework is that by the time a proposal gets to the snapshot phase it has been discussed at length by the community and proposals that get to the snapshot phase have been well-vetted (presumably).

What this does is dilutes the power of large $BANK holders to ultimately determine the scope and shape of the DAO because these (obviously self-interested individuals) are helping to ratify or enshrine a proposal into the DAO, rather than influencing which ideas actually get to the proposal and snapshot phase.

Committees Can Be Helpful Organize Ideas into Proposals More Efficiently

Another operational aspect I believe could be in the Constitution is developing official committees and determining their membership and how these committees can contribute to the organization of the DAO proposal, signalling and snapshot process.

Currently, while the ad-hoc nature of proposal development and posting is okay, there needs to be an official process to make sure that ideas aren’t duplicative, buried or not well discussed. I believe a high-level framework for organizing ideas efficiently should be in the Constitution, and a means that the community can vote on or approve committee members who have specific responsibilities and powers.

All of this will help to ensure that the Constitution is robust enough to serve as a guiding document, and hits upon the key issues that should be hashed out earlier rather than later to ensure the DAO operates efficiently and is effective.

I thought this was excellent, and the follow up points from everyone extremely helpful. Under Values, which I think were posted under a prior draft in Discord (by Frog?), I might suggest emphasizing the DAO is a “Community” or “Community of Individuals”
On the question of driving Value for the DAO, I think this too is important as it ultimately helps drive the mission, the sustainability and the viability of DAO long term. Well done everyone. I look forward to the journey, which will undoubtedly include sunny days and dark winters.

Hey thanks for the feedback, if you want to suggest some changes go to the mission and values section in the gitbook. I think this section is archived.
Cheers!

I like this a lot, but I have one problem, the appearance of a pyramid in the diagram.

It reminds me of a pyramid scheme structure. I think the whole of crypto would be better off if it distanced itself from anything related to pyramids/triangles.

Appearance is the first thing that people notice.

Is it possible to use something ‘block’ related, with the blocks getting smaller as the chain goes up? This still points to a hierarchical form of leadership, just without the pyramid.

No activity for a while. I’m moving to archive. Please reply if you want it reopened