Regens Unite Berlin (Sept 16-17, 2022) is bringing together people across various sectors who have the same goal: respond to the climate emergency by shifting our intentions from sustainability to regeneration.

Key outcomes of this event

BanklessDAO has previously supported Regens Unite in its first gathering in Brussels, May 2022, with the creation of a book with the event’s proceedings.

With Regens Unite Berlin (Sept 2022) we’re glad to present another opportunity to stand behind the mission of the regen community by acquiring a sponsorship package. The success of this Berlin event is critical to the kickoff of the global Regens Unite roadmap, and we need your support.

The world just broke the record of CO2 concentration in the atmosphere at 420ppm. We are heading to an inhabitable world. India, where a lot of unbanked and crypto projects are based, has been witnessing a massive heatwave. This can’t go on forever. People notice but they are trapped in the old fossil fuel economy. They burn out. They are lost. We are lost. We need to go through big changes together and that will require taking good care of each other. Going bankless is part of the solution.

It’s our duty to go meet other citizens that also want “System Change, not Climate Change”. They are fellow “Regens”, fighting not only for a sustainable future but for a regenerative one. One that will regenerate the soil, our communities and ourselves. We share the same goals and we all have pieces of the solution. It’s time to unite and support each other.

The goal of Regens Unite events is to break the normal silos we work and build in, sending positive ripples out into the world. For people like us that are building and innovating in web3, this is an incredible opportunity to have our work be influenced and shaped by those in all other sectors of regenerative work, and introduce those people to web3.

However, without dedicated people attending the event and working closely together post-event to gather learnings and communicate them, the ripples of this event won’t be as powerful as they could be. BanklessDAO can serve as a platform to help spread the importance of tackling climate change before it’s too late and to help people step out of the fossil fuel economy by going… bankless.

BanklessDAO is seeking to connect regenerative communities via BanklessDAO media initiatives. This could be the perfect opportunity to put that intention into practice and spearhead this direction. As mentioned above we are launching a global media initiative. BanklessDAO can be directly in attendance at the event, giving us the opportunity to introduce BanklessDAO, web3, and DAOs to a non-web3 native but regenerative-focused audience. BanklessDAO could position itself as being not only a supporter but also a contributor from day 1 of this movement, which will be highlighted in evergreen digital media content. The need to unite Regens goes far beyond just one event - we have 3 more planned already. This is just the beginning. 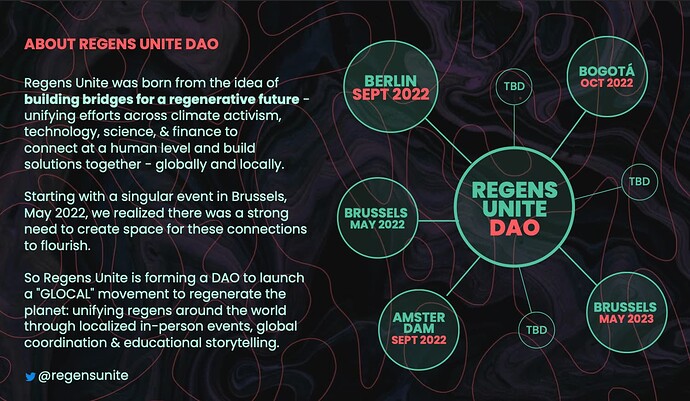 Screen_Shot_2022-08-17_at_2.14.16_PM1500×872 157 KB
The mission of BanklessDAO is to progressively - through its efforts, collaborations, and strategic partnerships - onboard one billion people to DeFi and Crypto. One of the big hurdles on the way is the fact that crypto is too often perceived as negative for the environment. Many often say: “I don’t know much about crypto but I’ve heard it’s bad for the environment so I’m not interested”.

We won’t change that on social media - we change that on the ground, by creating conversations between citizens IRL, where we can learn to trust each other again and realize that we all want the same thing. Only then we will be able to change the narrative.

Regens Unite’s goal is exactly that: give Regens outside of web3 the information that crypto can contribute to “System Change, not Climate Change’'. And vice versa, give web3 people the opportunity to learn from other Regens, so ensuring that we bring these learnings into our DAOs and web3 communities, centering regeneration at the heart of everything we do together.

We currently have 3 Sponsorship packages: Seedling (3k), Plant (6k), & Tree (12k). Another way to sponsor this event is by providing audio, visual, and written media content.

All the content created by BanklessDAO will be branded BanklessDAO. The logo will also be made visible on the homepage of http://regensunite.berlin as well as regensunite.earth.